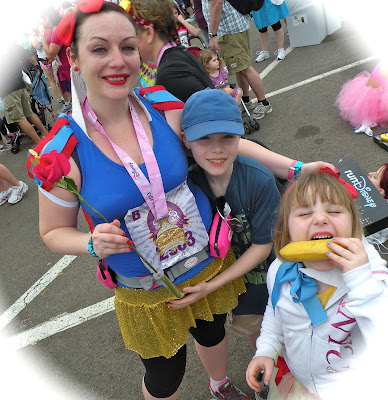 Last year at this time I would never have imagined sitting down to write a blog post about running 13.1 miles. The Disney Princess Half Marathon was a bucket list item. It was something I wanted to do "one day". It's hard to explain how things change other than to say that last January I decided I was sick of wishing my life away and wanted to do something about it. So instead of saying "one day" I decided to start running. I slowly added kilometres to my runs. In July I ran a 10k. The next day I signed up for a running clinic and as soon as registration for the Princess Half opened I signed up.
After running hundreds and thousands of kilometres this weekend finally came. To say I was excited is an understatment. To say my family was rooting for me ... total  understatement!

I woke up just before 2 am. A princess needs to get ready, and between hair and makeup and costume and of course some breakfast and coffee ... I knew I needed to give myself time. It sounds crazy to wake up early, but seriously. I was wide awake! I was excited.

I got to the bus at about 3:15 am. Before I knew it we were off to the races (literally). The bus was full of tutus and costumes. I totally fit in. That was the only time of the day I felt any anxiety. We arrived, and started the walk over to the staging area. I met up with Merida and Aurora (aka 2 Princesses on the run) and we started the race together.

One thing that you hear a lot about is the long walk to the corrals. We were starting in B, and honestly the walk didn't seem that long. It was a perfect morning. It was warm, not hot. The excitement was palpable. There was music blasting. It was awesome! 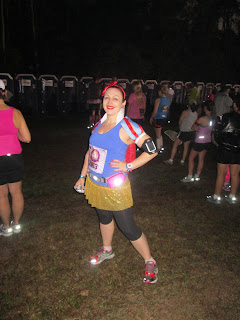 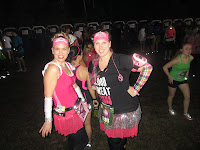 We even took  porta-potty break en route. (really... we were excited enough to pose at the porta potties!)

We turned around and there was Corral B! I worked hard to be placed there. I was not about to turn down a chance to pose yet again! 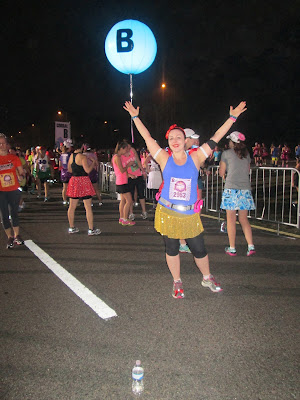 We hung out in Corral B for a little while. The time just seemed to fly as we watched everything going on. There were a couple of points it seemed to really hit us and we'd tear up, but for the most part, it was just pure fun. There was a lot of last minute water sipping, giggles, and planning.

Before we knew Corral A started and we moved it. It was 5 minutes till it was our turn! 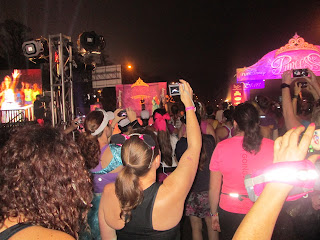 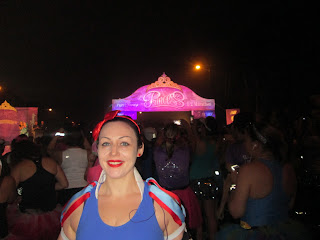 
I'd done a lot of races leading up to this, and I was grateful for all of that prep. I was thrilled to start with friends. The whole race was awesome, but I loved the beginning. It was just pure excitement. I wasn't running the race for time, and I was comfortable enough to start at a comfortable pace. My music was going, but I only used one ear bud. There was entertainment. We chatted a bit. I felt great.

Jodi and I ended up running at the same pace for about half the race.

Just before the 5km mark we saw the photo opportunity I'd been waiting for ... the Princes!

If I'd been running for time before, the fact that it was a crazy long line up killed that time. We lined up for about 10 minutes or so. It was worth it. While Jodi and I were standing there I saw Alana run past, so I dragged her into the line to join us. 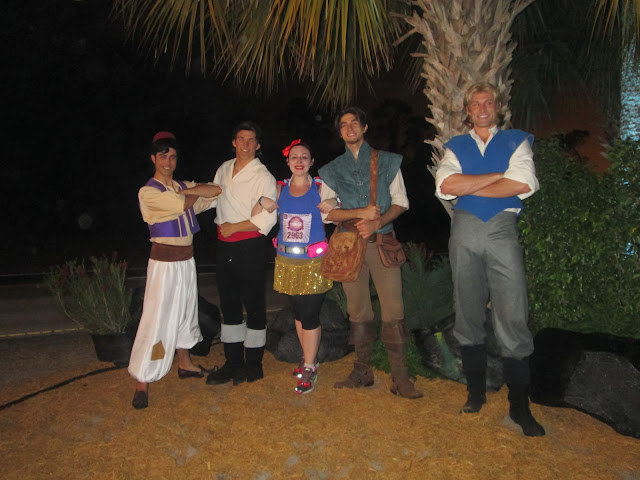 After the photo stop we had to boot it! I knew my family wasn't too far ahead. We took off again, and ran past some pretty awesome stuff! there was music and dancing puppets and Lightning McQueen. You could stop for all of these, but I wanted to keep running!
And then we hit the TTC(transportation and ticket centre). I knew my family was there and I had my eyes open for them.
And then I saw them!!! 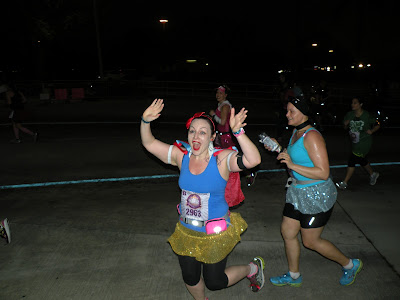 I totally broke race etiquette and ran in front of everyone on the road to give high 5's. Seriously. Mike and the kids were out of the hotel at 3:30 am to be there to support me! I was soooo excited to see them.

Next stop? That would be Magic Kingdom. Now, you have to understand that Jodi is a fast runner (she moved back from Corral A to start with Alana and I) so the fact that I was anywhere near her at around the 10km mark is amazing. And, I'm so glad I had someone to share that moment of "we're running through Magic Kingdom OMG with". So, as we entered we had a quick lipstick check and in we went!

Yep. I cried running down Main Street, USA. I was doing this. And it was awesome. 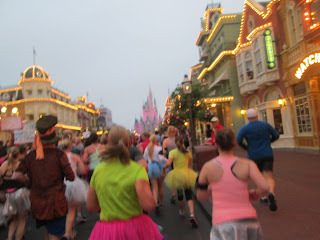 And then we hit the castle!!! 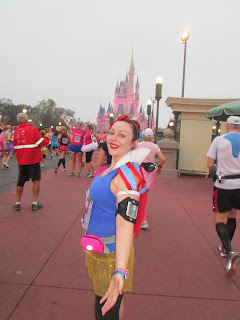 That was my favourite moment of the race. I'd been working so hard for this, and it lived up to all the hype. Not only was I there, I was feeling great! 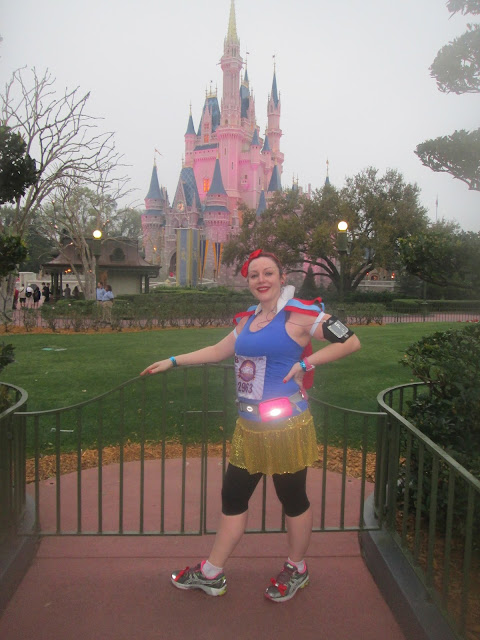 Truthfully, I was expecting the second half to be super hard. We were done the exciting part. And we were only at the halfway point. Whatever! This is what I trained for! As we exited Magic Kingdom and started on the path to epcot I had two big goals in mind 1) find my cheering family at the Polynesian and 2) Enjoy every moment of the race.

Before I knew it we passed the Mile 7 song. Yawn. It was Girl on Fire. That is one slow song. I was on a walk break and the song almost put me to sleep :) Anyway. I was on the lookout for my family. I found them. Mike and Matt were cheering. Chloe was asleep on the grass next to them! Mike took a quick pic and then we were all off to epcot. 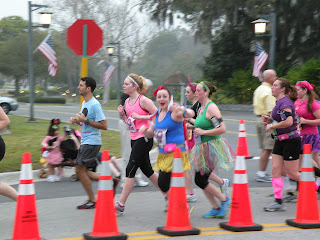 The next 7 miles flew by. There were a couple tough moments. But, it was just amazing. I got into a bit of a zone, and I just enjoyed my music and the beautiful day and scenery. Before I knew it I could see epcot. We also had to run all the overpasses and that was tough.
Probably the funniest part of that was when someone asked me to check my watch to tell her what mile we were at. I train in kilometres, and I had no idea. So, I explained that.
She was completely exhausted and said "who the heck trains in kilometres. that's dumb." It completely cracked me up because she realized she'd said it out loud. (and it was pretty funny). I told her we were close and kept going.
And then we got to epcot. When we ran in I was tired. We were 2k from finishing, and I was feeling it. I walked the water station and the awesome volunteers were cheering for me and saying "keep going Snow White" it was just the boost I needed and I was off again. I made sure my ear buds were out and I just enjoyed the moment.
I passed the gospel choir and I saw the finish.
And with that I was done!!!  My time was 2:53:10 (if you take out photo stops it was about 2:35)
My first Half Marathon complete. 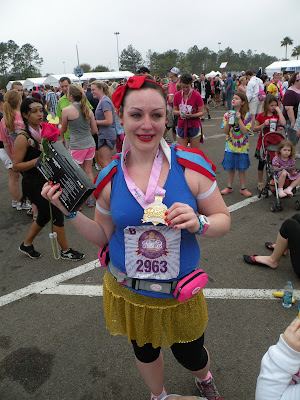 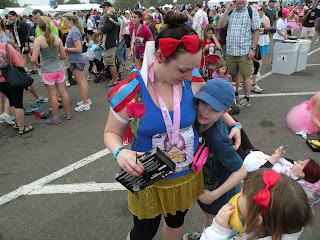 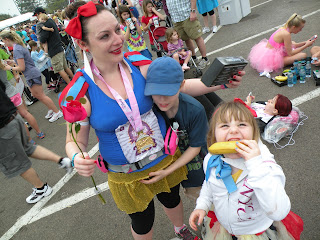 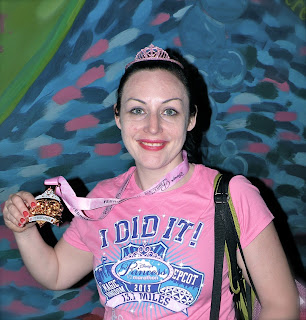 So ...
Would I do this again? In a heartbeat! I loved it. It was everything I hoped and I'm super proud of myself. I loved running it. If you're thinking about it. Sign up early. Train, and do it. It was life changing.
My next goal? I have a few. I'd like to run Goofy (a half one day. a full the next) and I'd like to do Tink (half in Disneyland).
And, more importantly, I'd like to share this with other people. I'm not sure whether it's signing up to help coach a clinic, or what exactly, but I can't imagine doing something so life changing and then just going back to life as usual.

Wow, great story! Congrats! My Dad would love nothing more than to don a tutu and run in the next one with you!

It was so great meeting you at Meet-Up. I loved reading your race recap. Congrats! I hope our paths cross again.

It is so great to see your kid achieve her goals throughout life. This is no exception even tough you have your own kids now. I'm super proud of you for just doing it!

I will be looking forward to your next post. Thank you
www.wixsite.com

Laural Dawn
Toronto, Ontario, Canada
A little of this. A little of that. I've given up trying to fit into a blog genre, and just write about what's going on. I can't tell you what to expect because I never know what's coming next!